The centerpiece and crown jewel of the 2021 Cadillac Escalade is the triple OLED screen setup facing the passengers. It’s an imposing cowl with 38 inches of screen real estate in total, and it’s a Cadillac Escalade-exclusive piece of technology. An interesting and unique feature like this has the potential to set Cadillac apart from the stiff competition in the luxury space.

Its appearance is just like that of the Cadillac Escala concept. We don’t often get to see interior concepts carried into production, so that’s exciting on its own. The layout consists of a 16.9-inch touchscreen infotainment system, a 14.2-inch instrument cluster and a 7.2-inch touchscreen to the left of the cluster. All of the screens are curved and use OLED technology, which is commonly used on the screen of your Android phone, iPhone or TV. It allows for the deepest blacks, best contrast ratios and extremely vivid colors. In short, an OLED screen is going to look better than an LCD screen, and that’s why Cadillac is using it. We sat down with a few folks who could tell us more about it.

Phil Kucera, Cadillac interior design manager, gave us some background on the decision to implement this tri-screen layout.

“To be honest with you, it was a high-end leadership decision,” Kucera says. “There was a lot of, ‘Hey maybe we don’t put that on the base level. And why do you have to use OLED?’ Because OLED is not the cheap way to go. So the fact that it stayed that size and remained OLED … I would bet that you’re going to see other people doing something like this. There was a real push to try and get here first.” 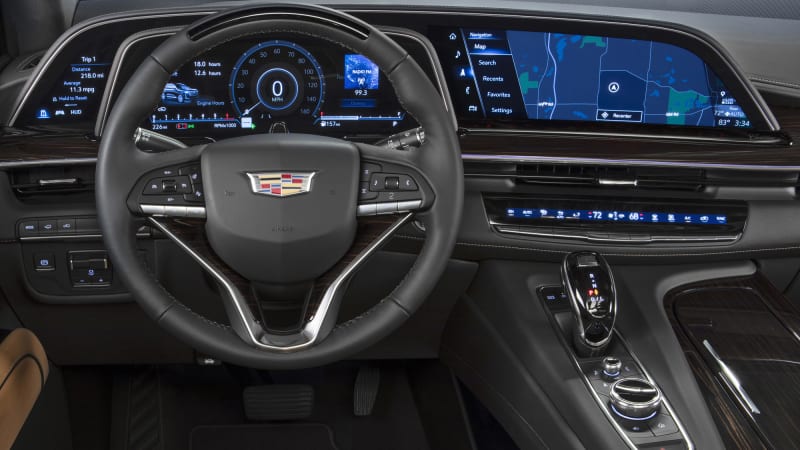 Sounds like the screen could have ultimately been a victim of cost-cutting measures. We’re glad it made it into production, because it looks promising. Sameer Gupta, GM’s engineer manager responsible for infotainment, walked us through the new digital landscape.

If you didn’t like the old Cadillac software from before, you’ll be happy to learn that this system is a completely new user interface, sharing nothing with any software before. Gupta told us that this is “a complete first-of use of this interface.”

“When we started doing the system, we envisioned a system that had rich graphics, but was also simple and adaptive,” Gupta told us.

After spending some time poking around in an Escalade, we can report that the new menus are full of rich graphics, pleasing animations and snappy transitions. The entire layout is completely configurable, meaning a user can lay their apps out however they’d like them on the screen. Owners can choose to interface with the tech via the touchscreen or a rotary dial. Cadillac has been putting rotary dials into some of its newer cars, but the Escalade has another trick. Instead of forcing rotary dial controls into a traditional touchscreen UI, the whole system transitions into a knob-friendly UI when you start to twist it or push it. When your hand approaches the screen again for touchscreen functionality, the car senses it and switches back to the touchscreen UI. 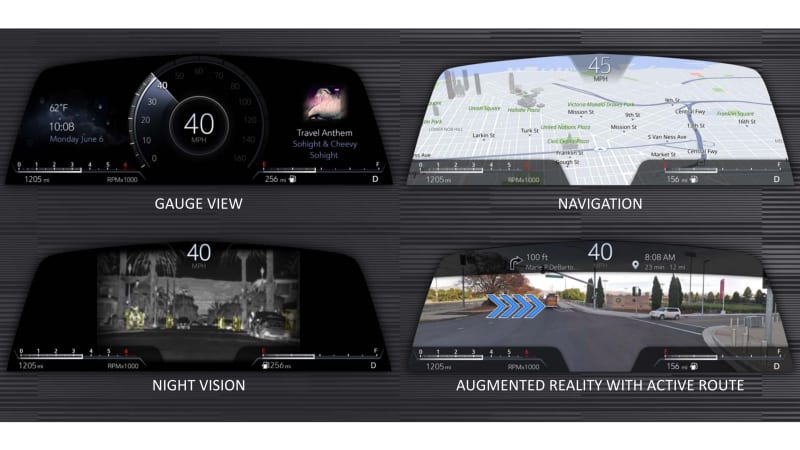 As for the instrument cluster, Cadillac has made changes there, too. Four modes are available: Gauge view, Navigation, Night Vision and Augmented Reality. Night Vision is new for the Escalade, but not new for Cadillac. The AR mode is new for Cadillac, though. It uses the view from the camera and applies directional arrows onto it while you’re using navigation to help you find your way about. It’ll even put a pin on your destination when you’re approaching it. These features all help modernize the Escalade’s interior tech, but Gupta also emphasized simplification of the instrument cluster.

“We simplified the cluster greatly. We moved things from the cluster into the center stack,” Gupta says.

GM believes it’s easier to find things in the touchscreen center stack than it is scrolling through endless options using steering wheel controls. For example, all the vehicle information like tire pressure and temperature gauges can be found in the center stack now. We’ll see how that works out when we get behind the wheel.

The third screen off to the left is there to allow users to switch between the four different screen modes quickly and easily. It’ll also display all your trip data and allows a quick access point to adjust the head-up display. Perhaps a 7.2-inch touchscreen is a bit overkill for those functions, but it sure does look good.

We also discussed how Cadillac would deal with burn-in, which can be a problem with OLED screens that display the same graphics for extended periods of time. In a vehicle, that means over a long enough period of time something like the outline of a speedometer could faintly ghost itself into view even after switching to a different view, like Navigation.

According to Gupta, the OLED screens went through the same validation procedures that GM puts any other digital display through. The automaker built in “intelligent algorithms” and temperature monitoring functionality to help combat the potential for burn-in. Further, Gupta told us that a Display Optimization Calibration process may be presented to the driver from time to time, which can shift the layout of the screen by a few pixels to keep the same ones from displaying similar colors for too long. It will also be possible for Cadillac dealership employees to run through the calibration instead of owners.

Gupta also informed us that the system will feature over-the-air updates for both the vehicle’s software and to keep its navigation maps up to date. GM will endeavor to keep the Escalade updated with quarterly downloads, but can also push out new software on an as-needed basis.

This website uses cookies to improve your experience while you navigate through the website. Out of these cookies, the cookies that are categorized as necessary are stored on your browser as they are essential for the working of basic functionalities of the website. We also use third-party cookies that help us analyze and understand how you use this website. These cookies will be stored in your browser only with your consent. You also have the option to opt-out of these cookies. But opting out of some of these cookies may have an effect on your browsing experience.
Necessary Always Enabled
Necessary cookies are absolutely essential for the website to function properly. This category only includes cookies that ensures basic functionalities and security features of the website. These cookies do not store any personal information.
Non-necessary
Any cookies that may not be particularly necessary for the website to function and is used specifically to collect user personal data via analytics, ads, other embedded contents are termed as non-necessary cookies. It is mandatory to procure user consent prior to running these cookies on your website.
SAVE & ACCEPT