Covid-Induced Anxiety Has Given Rise to the ‘Plant Influencer’

It’s literally taken a pandemic to bring us back down to earth—working from home, adopting new and wholesome hobbies, and generally considering our health more. And this downsizing of our lives is being mirrored in the kinds of social media accounts we’re following. Glossy hair roots are getting replaced by earthy plant roots, while selfies are being replaced by “shelfies.”

Craig Miller-Randle is 48, lives between Melbourne and Bali and recently reached 150,000 followers on Instagram. To put that into perspective, he had just 20,000 followers at the beginning of the year.

“I’m known for having some very large specimens of popular plants, but I also show people how to grow easy-to-find plants into amazing specimens with a bit of knowhow,” he says.

From begging a flight attendant to help him smuggle a metre-high orchid plant in the staff baggage compartment from an interstate trip (she caved) to packing a car so full of plants that a friend had to hold the leaves from his face as he drove, Craig finally decided to document his passion two years ago when his brother told him he wasn’t “with it” if he didn’t have an Instagram account.

With television and radio appearances on his resume, Craig credits his popularity to his mingling of both plants and interior design.

“When you have all of these Insta folk showing how stylish they can look in your apartment or loft or office—well it’s a no-brainer.”

Twenty-eight-year-old Benny Alcaraz has also been chronicling his indoor jungle on Plants by Benny, clocking up nearly 45,000 followers. What started as a travel photography feed four years ago quickly turned plant-based when he found fellow “plant friends who reassured [him] that spending $500 on that plant was totally justifiable.”

As a self-proclaimed “plant daddy”, Benny noticed a recent surge in followers after sharing his child rearing practices. He believes these “unprecedented times” have seen people flocking to a new hobby or somewhere to merely find a sense of comfort.

“With unfamiliar times ahead, keeping a plant alive at home can distract you from what is happening in the world. Even a dedicated plant care day—watering, fertilising, dusting leaves—actually leaves such a positive imprint to our mental health.” 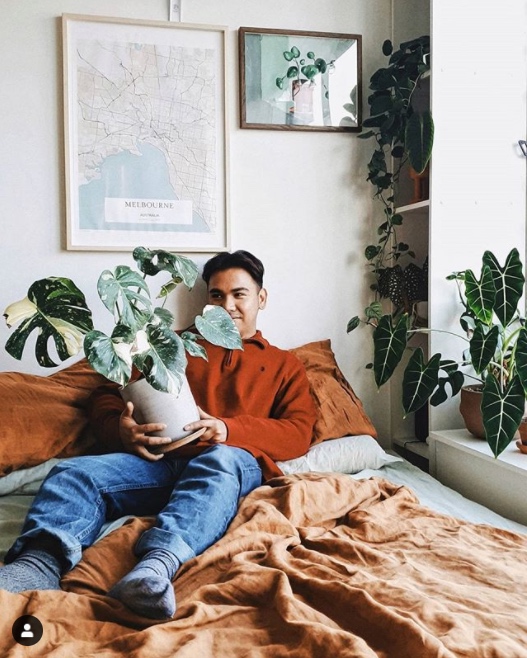 This appreciation may seem fresh, but our attachment to gardening actually stems from biblical times. Whether you’re religious or not, the Garden of Eden was created by God as a “paradise of pleasure.” The Persians also created gardens from around 500BC for purely hedonistic purposes, combining beauty, fragrance and flowing water to please all our senses. Louis XIV even oversaw the creation of the gardens at Versailles, which took 40 years to complete.

“For hundreds of thousands of years we lived in nature, we didn’t live in a concrete box that was germ-free, and we lost that connection to nature—so that’s why just a simple thing like looking at a plant can make you feel better,” horticulture therapist Phil Pettitt explains. “Plus that sense of self-efficiency and reduction of anxiety.”

The mental benefits of plants is also rooted in our reciprocal relationship with them, according to Phil. A sense of co-dependency is created as “plants respond to your care, they need you to grow…you’re caring for it and it’s caring for you in the same way.”

Phil is also a huge advocate of the “dirty hands, clean mind” philosophy. Like video games, “you lose track of time…when you’re physically gardening, you’re not present in anything but what you’re doing at that time.”

Working from home during this period also means we can spend more time improving our indoor spaces. With nearly half the Australian workforce stuck inside their homes, we not only have more time on our hands but are also itching to be outside in open spaces.

That’s why Sydney’s Royal Botanic Garden has seen a dramatic increase in visitors since the pandemic hit. The Sydney attraction relies heavily on international tourists, but the 30 percent surge has all been domestic.

“Because we can’t go abroad, it’s about this rediscovery of Sydney by people living in that space,” says Denise Ora, the site’s CEO.

Our inherent love of nature isn’t the only thing helping the Botanic Garden survive the crisis, either, as Denise believes a growing awareness of environmental conservation has also been a contributing factor.

“If you take the last 12 months of bushfires, COVID, focus on mental health: these are talked about so much and younger people see it as a way of changing the future,” she says. 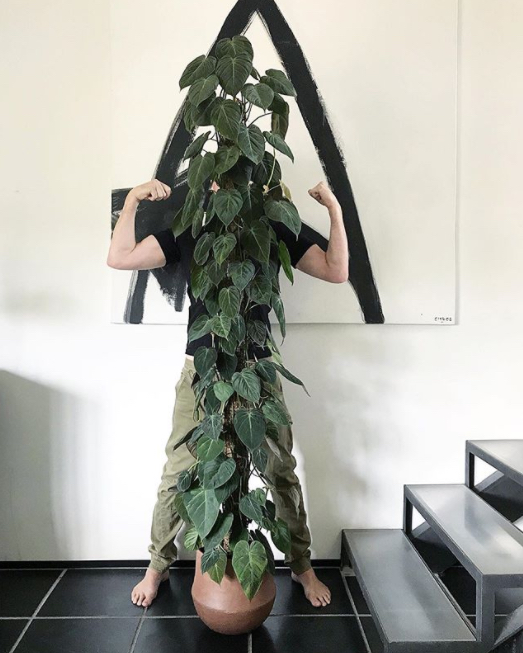 As Germaine Greer once said, “gardening is all in the future, and the less future people have, the more they tend to think about it.” Phil certainly agrees: “With the politics of late, and the fires, you feel helpless and think what can I do to make a difference? And gardening is a very tangible thing you can do.”

While we may have grown up thinking plants weren’t cool thanks to Burke’s Backyard and Better Homes and Gardens, the tide has certainly changed thanks to some heavily-filtered, square-framed images.

Hugo Starr works for Annandale Garden Centre in Sydney’s inner-west and deals with said “plantspo” on a daily basis.

“A lot of people will pull a photo from Pinterest and say ‘I want that plant’. It’s definitely seen to be cool to have plants,” he says. “Look at all the Instagrams of influencers who have an exorbitant amount of plants with a rainforest look in their house.”

The nursery has enjoyed an extra 50 percent of their usual sales during the pandemic, which is “quite unheard of.”

“Essentially everyone’s home and they haven’t really had this kind of time to be in their space. And also treating it like an office space… People are taking it as an avenue for therapy or creativity to make their homes as liveable as possible,” he says.

People are not only using the nursery for impromptu photoshoots: they’re also seeking the latest trends in the gardening world. According to Hugo, Chinese money plants, big travellers palms, bird of paradise flowers and golden cane palms will earn you social media cred—and customers are even calling in before they get stock of a new exclusive plant.

“Lots of clients want the biggest fiddle leaf we have, or the nicest looking plant on offer. You know how people drive a Mercedes to be recognised? They want to own this plant to have that same acclaim.”

For decades it was the amount of green in your wallet, not your home, that mattered. But it seems we’re now turning over a new leaf—whether you’re buying plants for the ‘gram or because you actually give a damn.