When it comes to the world of small sport utility vehicles, nobody does sport better than Porsche. That’s as it should be, as the 2020 Porsche Macan continues its reign as an exceedingly fun crossover in just about every performance guise. The Macan is the second crossover to come out of the Stuttgart-based sports car maker, and although it’s considerably smaller and cheaper than the Cayenne, it still packs the Porsche punch we expect.

A number of performance levels are offered; the interior is well-appointed, and its technology is keeping with the times. Just like every other Porsche, the Macan can be customized to no end. However, it’s also on the pricey side of the aisle if you want it equipped with many of the features offered by its cheaper competitors. That said, there’s no better small crossover to drive than the Macan, and if that’s a priority, it could definitely be worth the extra money.

The Macan was heavily refreshed for the 2019 model year, and some of the trim variants were dropped temporarily from the lineup. For 2020, the Macan Turbo and Macan GTS trims are back, having received their own set of upgrades.

Just as we’d expect from Porsche, the Macan is customizable to your heart’s content. Aluminum, carbon fiber, wood and paint in a dizzying number of combinations are available.

The interior ergonomics and driving position are also second to none. You sit reasonably low, yet forward visibility is superb. The sloping roofline really cuts into rearward visibility; an exterior design compromise. You can drop the perfect (optional GT Sport) steering wheel right into your lap, and it never obscures the gauges. It’s the perfect amount of thickness, is quite small in diameter and has clicky metal paddle shifters mounted on the back.

The gauges might be old-style Porsche at this point — newer models have multiple digital screens — but that doesn’t make them bad whatsoever. The lightning-quick tachometer is mounted in the center where it should be for a vehicle with a sports car badge on its hood, and the easy-to-read digital speedometer is nestled within it.

The center stack is covered in buttons and switches. It looks cluttered, overwhelming and just a bit dated. On the other hand, its physical buttons are easier to identify by touch alone than the touch-capacitive “buttons” found on Porsche’s newer models that admittedly look more modern. Neither is a perfect solution, then.

There’s no such controversy surrounding the infotainment system, which is excellent. Porsche managed to cram in its latest infotainment system on the 10.9-inch widescreen found in front of the shifter. It’ll run Apple CarPlay, but not Android Auto. The system is responsive, appears modern and focuses on making the essentials easy to deal with. We particularly like the customizable home screen that lets you select what controls and information you want to see and where you want them placed. 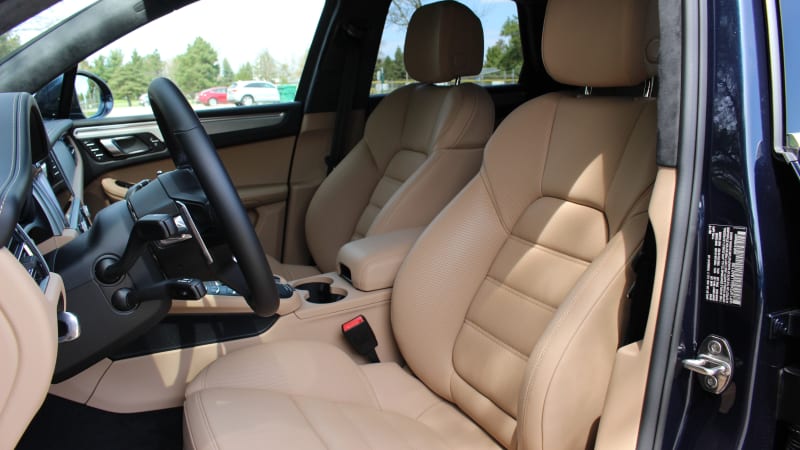 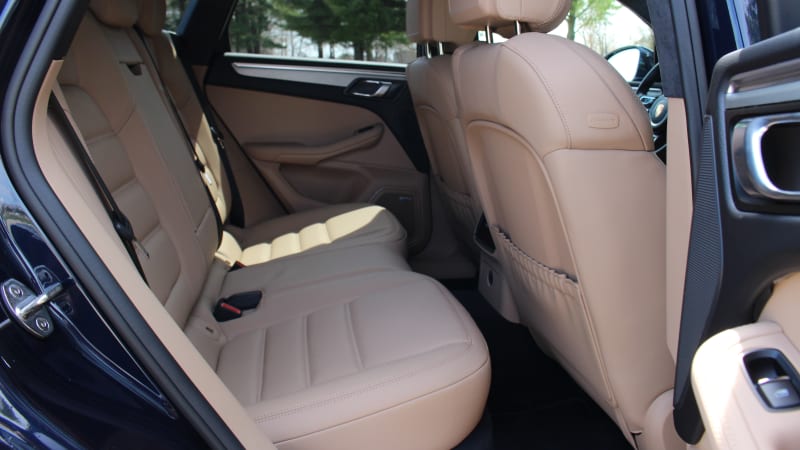 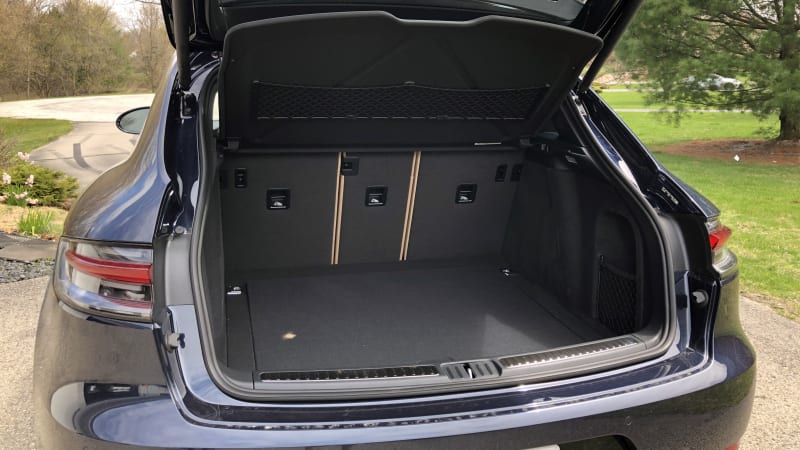 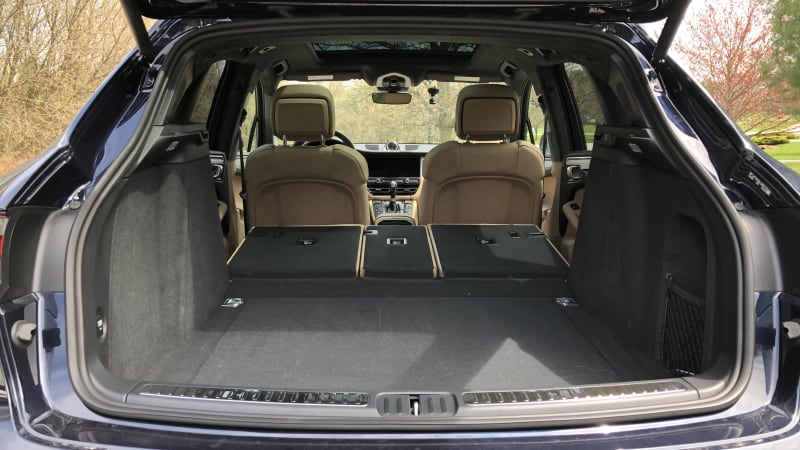 How big is the Macan?

The 2020 Macan is about the same size on the outside as competitors like the BMW X3, Audi Q5 and Mercedes-Benz GLC-Class. But while their footprints are all in the same ballpark, the Macan has a coupe-like slant to its rear end that cuts into cargo space, leaving it with a compromised 17.7 cubic-feet of space with the seat up. In that way, it’s comparable to sport utility coupes like the BMW X4 and Mercedes GLC Coupe. Still, the Macan is capable of lugging around enough baggage for shorter getaways. Check out our full luggage test here.

Backseat occupants may be slightly annoyed getting in through the narrow entryway, but it’s spacious enough once seated. Average-size adults will have sufficient room for their knees, but nothing more. Anybody sitting in the middle will have to deal with a tall tunnel sticking up, too. Small families could get away with the Macan, but it’s one of the least utilitarian choices in this class of small-ish crossovers.

What’s the performance and fuel economy?

Porsche offers a number of trims for the Macan, all with varying degrees of performance.

The base Macan is equipped with a 2.0-liter turbocharged four-cylinder that puts out 248 horsepower and 273 pound-feet of torque. That’s good for a 0-60 mph time of 6.3 seconds, though we should note that all of the 0-60 mph times here can be chopped by 0.2 second if you opt for the Sport Chrono Package. The base Macan is rated at 19 mpg city, 23 mpg highway and 21 mpg combined. All models are equipped with Porsche’s seven-speed (PDK) dual-clutch automatic transmission.

At the top is the Macan Turbo, also equipped with the 2.9-liter twin-turbo V6. This one is slightly more potent through greater boost, ringing in at 434 hp and 405 lb-ft of torque. That drops its 0-60 mph time down to 4.3 seconds. Fuel economy is exactly the same as the GTS.

Your Macan experience will change drastically depending on which trim you go for. If you simply want the cheapest Porsche that money can buy and don’t care that much for speed, the base Macan is still a lovely handler and not exactly slow. We highly recommend stepping up to the S, though. It’s much more potent, accelerating and sounding more like you’d expect from something wearing a Porsche badge. It’s well worth the extra coin.

Even better than the S, though, is the GTS. It’s the sweet spot of the Macan lineup, bringing the best handling chops to a car that’s cheaper and slightly less powerful than the Turbo. When driven hard, the GTS shrinks around you, and it delivers the speed, response and feel that has made the Porsche Macan the driver’s choice in this class for six years. There’s still more steering feel than you get anywhere else, and Porsche’s PDK transmission continues to snap off sharp but smooth gear changes at just the right time. Porsche’s chassis tuning also remains a few steps ahead of the competition, and the Macan continues to defy its front-wheel-drive roots (it’s built on Audi’s previous-generation “MLB” platform). There’s very little body roll, and there also isn’t a bunch of head toss like you get in some M-tuned BMWs.

The Turbo is the quickest of Macans, and it feels faster than the official 4.1-second 0-60 mph time (when equipped with the Sport Chrono Package). Launches are forceful, and the all-wheel traction catapults you down the road with anger. There’s very little body roll, even with the Turbo’s standard suspension (air suspension is optional on the Turbo and standard on the GTS). It’s not as tail happy as we’d prefer it to be for a sports crossover, but the all-wheel drive system still effectively doles out power through and out of corners to great effect. Just like the GTS, the Turbo feels like a smaller car than it is through tight corners.

In regular driving, every Macan is comfortable and pleasant. With the shocks in their softest setting, it absorbs potholes and road imperfections better than its handling suggests it would. There’s a livable amount of road noise from the sticky summer tires, and the excellent seven-speed transmission can double as a docile commuting partner. That’s impressive, considering how good it is at imitating a 911 on a track.

What more can I read about the Macan?

Our first drive of the refreshed Porsche Macan. This includes more information about its design, engineering and what changed.

What features are available and what’s the Macan’s price?

As is typical with Porsches, there isn’t a whole lot of standard equipment on the Macan. Take a trip through the configurator, and you’ll see what we mean. Want auto-dimming mirrors, heated seats and Apple CarPlay? That’ll be extra. The same goes for any kind of trim or material other than the standard black or grey interior. While there are innumerable performance-enhancing options, there are two that we consider must-buys if you want to take full advantage of the Macan’s sports car-aping capabilities: Sport Chrono Package ($1,360) and Sport Exhaust System ($2,930).

The Macan S offers the best performance for your dollar, and the GTS is the best compromise for enthusiasts who want to save a few bucks over the Turbo. All of the base prices are listed below, but you can find a more complete breakdown of their respective features, specs and local pricing here on Autoblog.

What safety equipment does the Macan offer and what are its crash test ratings?

Porsche offers next to no active safety features as standard equipment in the Macan. Only lane departure warning and parking sensors are included in the base price. There are a number of items available as options including: blind-spot monitoring and lane-keep assist (they can be ordered separately or bundled together), a 360-degree camera, and adaptive cruise control that brings with it forward collision warning and automatic emergency braking.

The 2020 Macan has not been crash tested by a third party.

Any cookies that may not be particularly necessary for the website to function and is used specifically to collect user personal data via analytics, ads, other embedded contents are termed as non-necessary cookies. It is mandatory to procure user consent prior to running these cookies on your website.